Dream Casting: Jem and the Holograms 2012

I did this before split up but I decided to do it again as new talent has arisen and match up better. It's almost 2012 and I'm talking about a series from 1985!

Jerrica Benton/Jem / Rachael McAdams
Jerrica could have be considered a goody goody two-shoes but she was concerned for her family, friends and foster kids. She had internal conflicts like any person. The mysterious Jem with no last name and no past. Jerrica got to go free. Dunno if she can sing. I know you might be saying, why not Gwen Stefani but unfortunately age is a factor and Jerrica was a teenager or in her early twenties I think. No, I didn't pick Rachael McAdams because of the new pink streaks she has but because I think she has the qualities for Jerrica that would make the audience care for her. On Pop Culture talk show on 9/14/10, Samantha Newark (the speaking voice of Jem) even said she thought Rachael would be a good pick. but people might lean on... Lady Gaga might be the most popular chocie. I know she said she wanted to act.

Rio /  Tyler Hoechlin / Rodrigo Santoro
Jerrica's long time sweetheart who learned under her father and became the group's manager. He fell for Jem and was torn between the two. He also had a mean streak, a thing about liars. Of MTV's Teen Wolf and 7th Heaven, he has those dreamy blue eyes and jet black hair. And he's a good actor, so I think that would be good for Rio. And we know he can handle having a mean streak. 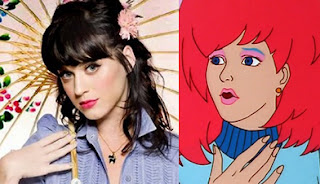 Kimber Benton / Katy Perry
Jerrica's kid sister, the youngest and most passionate of the group. She let men hang on by a string, she dated and dated. She had her own 'sister shadow' issues like any little sister. She wrote the songs for the band. I like her music but I don't like her personality, but eh, people like her and I think she might do a decent job as Kimber, be a little sister to Lady gaga and be the girl who has lots of boyfriends. 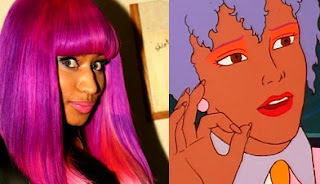 Shana Elmsford / Nicki Minaj
In the beginning she played the drums. She was real good at designing clothes and dreamed to have her own fashion line or something. She was a foster girl who grew up with the Benton sisters. She is clearly inspired by Jem, and I think would make a great Shana, even though my last choice Rihanna would still make a good choice too. 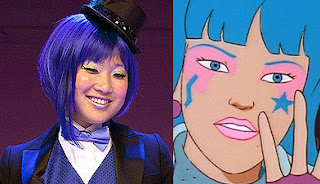 Aja Leith/ Jenna Ushkowitz
Lead guitarist and tomboy, Aja also grew up with the others. She was very courageous and no bull kind of gal. Tina from Glee can sing and I think she would make an awesome Aja. 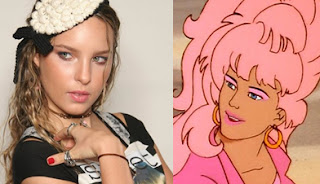 Carmen 'Raya' Alonso / Belinda
Raya was the 'new' Hologram and naive to the show business and had a Latina accent. Mexican pop singer, born in Spain. The only English she has done was in "Cheetah Girls 2". 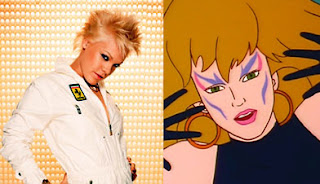 Pizzazz/Phyllis Gabor / Alecia Beth Moore "P!nk"
The spoiled brat who is really a lonely girl inside, the leader of the Misfits. She was the bad girl you loved to despise. Okay I know what you're thinking, she should be Jem but come on, playing the bad girl is way more fun. I'm sure she'd have fun with it. And I also think, she can pull the soft side of Miss Gabor. I chose her before and I still think she'd be great! 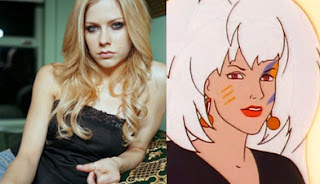 Roxy / Avril Lavigne
The second hand man to Pizzazz. She'd follow Pizzazz but when she wanted to. She was illiterate and came from the 'bad side of town'.  I think she'd have more fun as a baddie. She can sing but Roxy didn't sing that much solo--except for in one episode but they used Pizzazz's singer. 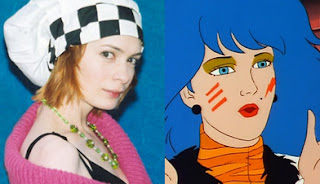 Stormer / Felicia Day
The sweet compassionate 'always look at the bright side' pushover of the group. Oh, sweet sexy Felicia. She was in 'Buffy the Vampire Slayer' and Dr. Horrible's Sing-A-Long Blog, I think she can cover the sweet pushover anytime. And in my fantasy movie, she gets the guts and stands up to her group mates. How will she look like in a dark blue wig? I don't know. 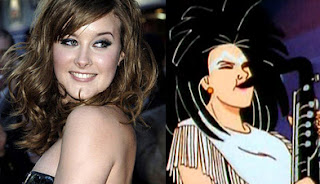 Jetta / April Pearson
She was the tough new girl in the Misfits. She played the saxophone. She took crap from nobody. According to Christy Marx, when she suggested the new Misfit be African-American, the people in charge were against the idea but that a British character would be fine. It's funny. My vision of a black Misfit would have a mohawk for some reason. British actress from "Skins." 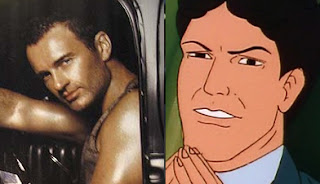 Eric Raymond / Julian McMahon
His name is the show writer Kristy Marx's brother. He was the only major character that wasn't a doll. He was the 'villain.' Basically the Misfits made him their bitch. The go-to bad guy? And Eric wasn't sexy at all but heh, its a movie. I think he'd be a nice fit and it be nice women chewing him out for a change. I picked him last time and still think he'd be a good choice, him or Zachary Quinto or Dylan Mcdermott. 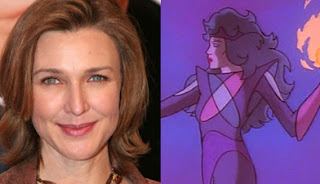 Synergy / Brenda Strong
How Jerrica actually transformed into Jem was through a super advanced computer that her father built, originally meant for using holograms to revolutionize the music and entertainment industry but it became so powerful that he feared it landing in the wrong hands so he left it in possession of his birth and foster daughters. Her personality was modeled after Jerrica and Kimber's singer mother who died when they were young. As it can be imagined, it was hard to think about what actress can balanced a stoic computerize mentor that gave motherly advice and also be coy. Brenda is the go-to dead mother narrator, I can see her both being funny and good with advice. I don't know how she will look in purple, but she would be good as Jacqui Benton in flashbacks. 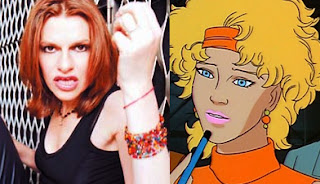 Lindsey Pierce / Sandra Benhard
She is a VJ that had her own show. Now, could any old MTV VJ play her or someone with personality? I think Kathy Griffin would be hilarious as a mix of Lindsey and gossip queen Harriet Horn. Or to be totally vicious, maybe someone like Perez Hilton in drag. Too bad Divine is gone. She could totally do the vicious gossip queen shtick. 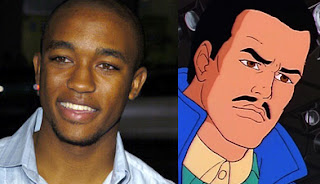 Anthony Julian / Lee Thompson Young
Shana's boyfriend and confidant and director for virtually everything involving the Holograms such as movies and music videos. Best known for 'The Famous Jett Jackson,' I think he would be charming. 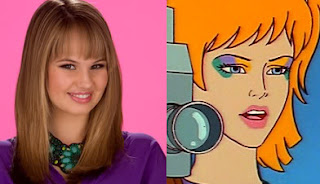 Vivien 'Video' Montgomery /  Debbie Ryan
The videographer of Jem's friends, if they keep it in the 80's, the big lugging camera would make sense. I guess if it is set now, she can have one of those small DVs and just be a doing a web-exclusive material for them. Sweetheart from Suite Life on Deck and Disney's Jessie. 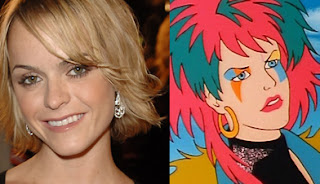 Constance "Clash" Montgomery / Taryn Manning
Video's cousin. She was the wild and crazy fan of the Misfits, she made a ruckus with symbols on her wrists. She desperately wanted to be a Misfit. Her dad was always bossy over Video's dad. McCrazy, she has done Crossroads, Crazy/Beautiful, and Hustle & Flow. 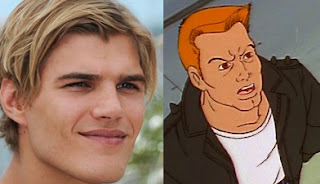 Zipper / Chris Zylka
He wasn't a doll but had his name on his jacket for some reason. Eric Raymond (baddie) used him for dirty deeds to 'ruin' Jem. He was a shady character that was also used for comic relief. For some reason, in some episodes his hair turned black. From "Secret Circle" and the short-lived "10 Things I hate about you" would be perfect. He's good at being sneaky and hot at the same time. 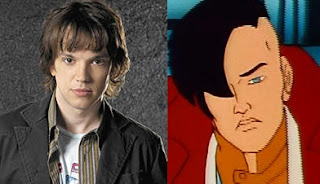 Techrat / Eric Millegan
When writers got bored with Zipper, a new character was introduced. Techrat, a tech expert who Eric Raymond employed to 'ruin' Jem. Show writer Christy Marx originally wanted Techrat to be a Boy George-like androgynous and ambiguous. Unfortunately, whoever was in charge wasn't comfortable with the idea and made him male. He was on "Bones," it was hard tot ell if he was a woman or a man, I think he'd be a good androgynous Techrat. 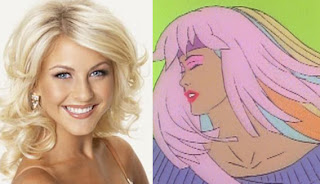 Giselle "Danse" Dvorak / Julianne Hough
Guess what she did? Well, she had an awesome storyline in which she broke her leg and had to go through rehab. Cartoon characters going through rehab. Also she was from Eastern European decent. Good dancer and singer. 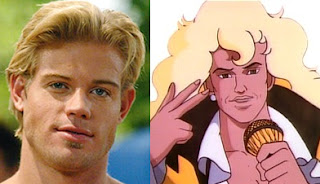 Riot / Trevor Donnovan
Lead singer of the Stingers that came in Season 3 and was competition for Rio, he loved Jem and not Jerrica. He also had daddy issues. It would be an interesting wrench to throw in. Sure he looks like a Ken Doll but wasn't Riot based on a doll? (Even though the doll was not released---as of yet). He has played the bad guy before and also an egoistical jerk, also the sensitive gay guy so I am sure he can handle the duality of Riot being self-centered, but also charming, and have daddy issues. 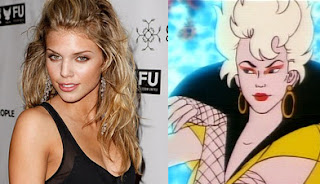 Rapture / Annelynne McCord
A con-artist and I found her annoying, she was so self-righteous. 90210, Nip/Tuck, good at being a witch. 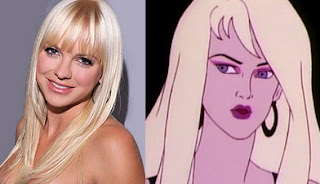 Minx / Anna Faris
German character, she was always after Rio and had a hinted romance with Techrat. She was selfish and cruel and anti-American. I wanted a young actress but I can't think of anyone else better. She can handle the accent.

Posted by Lavender Ranger at 12:47 AM